We believe that our commercial cattle represent excellent examples of the Shorthorn breed. They are moderately framed, easy calving, fertile, good footed, even tempered cattle which are easy doing and produce great calves.
Our commercial herd began with the purchase of ten Shorthorn heifers and a stud bull in 1994. These heifers were bred by the Schiller family, “Tarwong”, Hay and their descendants are still in the herd today. In 1995, 20 heifers were purchased from Jock McRae, “Eilan Donan”, Victoria. These females were joined to our Caskieben bulls, from the Williamson family of Carisbrook, Victoria.

Other cattle were purchased from the Arnott family of Jerilderie. These were of Lone Pine and Futter Park blood. An excellent line of 20 heifers of ex Stud lines was purchased from the Mitchells, “Magnet”, Deniliquin. During the drought, we also had the opportunity to purchase more lines of Tarwong cows. These purchases formed the basis of our commercial herd.

Our commercial cows have always been joined to Stud bulls. Some of them now have four and five generations of these good bulls in their pedigrees and present as excellent examples of the breed. We are proud of the fact that our entire commercial herd has now been upgraded to Herd Book, the top Shorthorn registry. 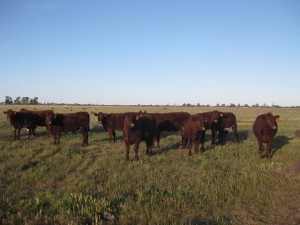