The Toogimbie Stud herd began in 1999 with the purchase of the DCC Prophet (imp) heifer, Petersons Prophet Elle (P) (AI).

We then bought two heifers from Knox and Peter Durrant of “Nullamanna”and “Yarram” Shorthorns. Yarram Topical (P) was also purchased from Peter Durrant and this Royal Melbourne Show placed bull produced a great line of females for us. A large framed son of Marellan Vanguard, Topical was used sparingly in the Nullamanna and Yarram herds before our purchase and his great grandson, Nullamanna Balsa, was successful in the Durham herd. He was followed by the Marellan Waratah son, Nullamanna Waratah’s Vagrant.

We then purchased Lone Pine Justice from Chas and Vie Hawkins of Lone Pine, Broome Invercargill from Gillian Leeds, Weebollabolla Ziggens from the Munros, Royalla Jedazzle from the Jobs and more recently, bulls from Sprys and Belmore.

Other Stud females were purchased from Gillian Leeds’ Broome Stud, the Marrington “Heart of the Herd” reduction sale in 2007, Marellan, the dispersal of the Darkinjung Stud, the Lachlan dispersal and the South Australian studs of Lake Hawdon, Broughton Park, Belmore, Bundaleer and Bayview.

In November 2010, Steve attended the Broome Dispersal Sale and purchased four cows and a heifer. These included Broome Glow Wayward, dam of the $17500 Sydney Show Intermediate Champion Bull of 2007, Broome Kentucky. Gillian Leeds felt that this cow was one of the top lines of the sale. We now have representatives of the four original Broome lines descended from the Lone Pine heifers: Watermaid, Wallflower, Wheaten and Wayward.

In 2011 we were very excited to be given the opportunity to purchase the TLC herd from Cye Travers. Cye has been a very successful breeder of moderate framed Shorthorns which have often been integrated into the Sprys herd and also were used in the Lachlan herd. The TLC cows, including five daughters of the legendary Sprys Legends Lily W009, will complement our existing herd very well. Sprys Legends Lily, a daughter of JR Legend 78H (Imp USA) is the dam of 55 progeny to date. She has produced some outstanding offspring including the Dubbo Sale topper Lachlan Miss Blaster (P) (ET) heifer and the successful sires Lachlan Dynamite and Sprys TLC Dynamic. Included in the draft is a flush sister to Dynamic and Dynamite.

We also purchased several daughters and a granddaughter of JR Legend (imp) daughter, TLC Erica X002. TLC F6 is an ET female by Rockdell Pride 50K (imp Can). Like her mother, she is deep red and slick haired who should breed very well. Erica X002 has been a most successful breeder for Sprys; she was dam of the top priced lot at the Sprys Tamworth Bull sale of 2010 and another son sold for $9500 to Deltroit Station at the Sprys 2011 Wagga Wagga Sale. Gerald Spry describes this bloodline as “a great breeding maternal and high IMF line”. Erica is also a full sister to the successful sire TLC Icon X003 (ET) (AI) (P) whose progeny sold to $8000 at the 2011 Sprys Wagga Wagga sale. Icon is also the grandsire of Sprys Icon Wagon C092 (P) (AI), which sold to the Arubial and Grove Studs for $27000.

Also included in the draft were two Canadian ET heifers by Rockdell Pride (imp Can) and Wolf Willow Major Leroy 1M (imp Can). These heifers were out of HC Melba Niam and HC Lady Sophia who have both been used successfully by Sprys.

The TLC herd, with their great feet and udders, gave us significant herd improvement and a number of our top performing cows originated here.

Now, in 2020, it is 8 years since we purchased any Stud cows and our herd is filled with descendants of these cows. 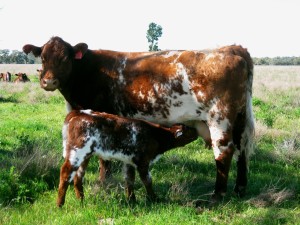 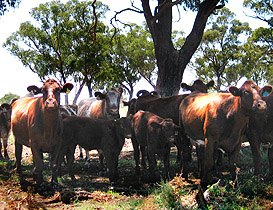 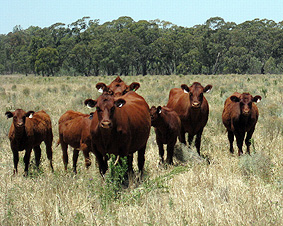 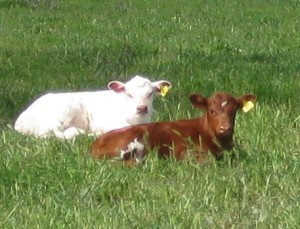 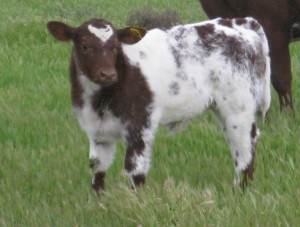 Heifer calf out of TLC Melba, by Sprys Dynamic. Melba was imported from Canada as an embryo.