We purchased Bundaleer Derrimut X87 as a star lot and the top priced female at the Bundaleer Female Sale of 2008.

At foot was the lovely heifer, Bundaleer Derrimut D101, by Bayview Geoff W54 and she came in calf to Bundaleer Cambridge C13. Daughters of Bayview Geoff sold to $7000 at the 2007 Bundaleer Sale and a son, Bundaleer Zolton, sold for $16000 at Dubbo National in 2006.

The Derrimut family is one the top female lines of the Bundaleer Stud and has produced many champions and top selling progeny. This includes the $19000 Dubbo sale topper of 2005, Bundaleer Yankee Cruiser. Derrimut X87 was also closely related to Derrimut 132 whose embryos sold to Wavendon Shorthorns U.K., producing outstanding show and sales results with the progeny.

Derrimut X87 was a long feminine cow with excellent structure and temperament. With milk figures of +12, she was a trait leader for milk and combined above average Rib and Rump fat figures with good growth and moderate birth weight.  She has sisters still active in the Bundaleer herd. 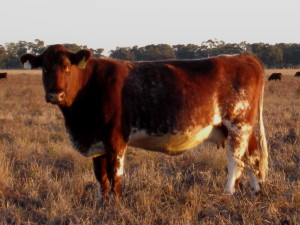