Over the years, we have been fortunate to have the opportunity to buy many Broome females. This cow is certainly one of the the best.
Now advanced in years, she still has excellent structure with very correct feet and udder. A very good doing cow, she has reared two excellent heifer calves for us. The first, Toogimbie Glow Wayward G59 by Marrington Attraction, has produced a fine heifer calf to Toogimbie Cardiff C6 in an unassisted calving. The second is a deep red heifer by Futurity King Fu Panda. Glow Wayward was sold as one of the star lots of the Broome Dispersal sale of 2010. Breeder, Gillian Leeds described her son, Broome Kentucky A111, as an 'exceptional bull…very correct with great balance and head carriage and an exceptional temperament’. He went on to be Intermediate Champion at Sydney Royal in 2007 and sell for $17,500.
Glow Wayward is from an extremely strong maternal line. Her dam, Broome Zeriba Watermaid, was an excellent breeder with other daughters also proving themselves as very successful breeders. Broome Eucalypt Waywardu 137 produced Broome Ignite Y47 which sold for $12,000 at the 2005 Broome Bull sale. Broome Y16 Importance, son of another daughter Broome Frill Wayward V201, sold for $20,000 to the Polldale and Calmara studs at the same sale. 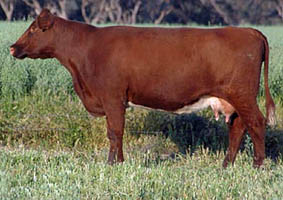 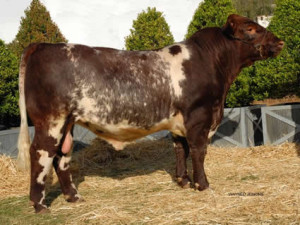