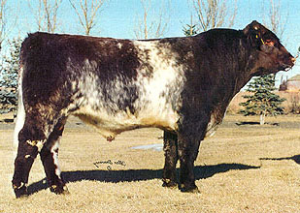 Eionmor Mr Gus 80C is a roan Canadian bull imported to Australia by Gillian Leeds of the Broome Stud.

Gillian then used him for many years in the Broome herd with great success. Many of the best Shorthorn herds in Canada today carry the blood of Mr Gus.

I attended many Broome Stud Sales and I was always extremely impressed with the Gus progeny. They were very well muscled, good tempered and had great structures.

Over the years, they sold very well with Broome Importance selling for $20,000 along with Broome Kentucky at $17,500. Gillian also bred some outstanding bulls for the Broome herd from Mr Gus. These included Broome Flame and Broome Hudson, both wonderful sires themselves.

We have a fine Mr Gus daughter in the Toogimbie herd, Broome Killarney Kim A82. Purchased as a calf at foot, Kim A82 started her breeding career with twin calves born unassisted. She has gone on to produce 2 more sets of twins and at 10 years of age, still has a wonderful udder and structure. With several daughters producing well in the herd, she has been the herd leader on her progeny's adjusted calf weight ratios.

The Mr Gus semen sold at the Broome Dispersal sale was purchased by Andy Withers of the Belmore Stud. 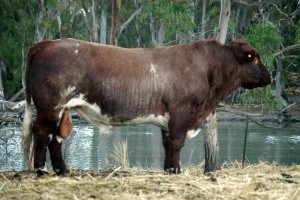