Admired by cattle enthusiasts from countries as far flung as Scotland, Northern Ireland, Argentina, Brazil and Canada, Sprys Dynamic D011 (P) has proved to be an excellent bull for us. He was purchased privately from Sprys as a yearling and has consistently produced quality well muscled off spring.

Dynamic is a very well covered thick roan bull who is a wonderful doer with a real sire’s outlook.

The Sprys felt that he would be a great heifer bull with the scope to contribute to the main herd.  This has indeed proved to be the case.

With Dynamic’s rib and rump fat figures in the top 4% of the breed, it is no surprise that his progeny are early finishing and easy fleshing. His heifers held their condition well during the very dry season of 2012/13 when we had some of the lowest rainfall totals on recent record.   Dynamic's extremely high IMF (top 1%) suggests excellent marbling potential and he is very smooth coated.

Dynamic’s low birth weight figures were confirmed with the arrival of his first calves in 2010. Yet these calves held their own in kilogram comparison with the calves by bigger bulls at 12 months old. He is now a trait leader for Birthweight on his Breedplan figures.

Dynamic is by the Sprys Master Blaster Z039 son, Sprys TLC Dynamic B174, who has been a successful sire for Sprys. Master Blaster sold for $48,000 and is proving an exceptional sire in his own right. Dynamic is a great grandson of JR Legend through Sprys Legends Lily W009.

We were very pleased with the performance of Dynamic's bloodline steers in The Land 2015 Beef Spectacular Feedback Trial. He was the sire of 2 of our steers and the grandsire of a 3rd in our team which was the highest ranking purebred Shorthorn group in the competition. 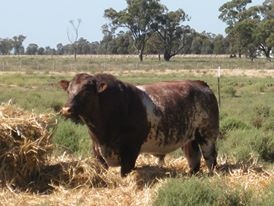 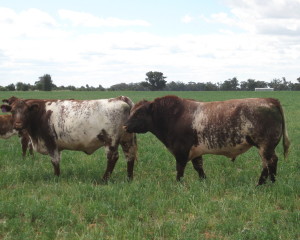