We purchased Sprys Emerald at the Sprys on property bull sale in 2011. He is a slick coated roan bull displaying excellent structure and disposition. The Sprys believed that he has ‘an excellent range of EBVs and still displaying a lot of length of body with great carcase expression’.

Sprys Emerald is in the top 10% for Gestation Length and IMF, top 15% for Scrotal Size, top 20% for Calving Ease Daughters and top 25% for Birth Weight. He is also above average for Rump Fat.

His sire, Marellan Emerald, has been most successful producing 366 performance recorded progeny for a number of top studs. Among his progeny is Nero E.M Zeehan purchased as a young bull by Marrington for $23,000 and now owned by Peter Durrant, Yarram stud, Moama.

Other notable offspring include Sprys Miss Emerald sold to the Bennetts of Glenelgin for $22,000 in 2010. Gerald Spry rates this heifer as ‘potentially the best we have bred’. Sprys Superstar F19, Junior Champion bull at the Brisbane Show in 2011 and now owned by the Tippetts of Glengyron Stud, is also by Marellan Emerald.

Sprys Emerald also has an excellent maternal line. His dam, now in the donor programme at Sprys, is a half sister to Sprys Master Blaster and also a half sister to Sprys Augustas Benchmark C069, dam of Sprys Exclusive E021. Sprys Exclusive sold to Outback Shorthorns at the 2011 Sprys Tamworth Sale for $23,000 and is rated by the Sprys as the best bull they have bred at Tamworth.

Emerald’s dam is by the great sire, Sprys Zambesi 2nd, who features in the pedigrees of many great shorthorns. Zambesi 2nd daughter, Sprys Zams Carnation Y050, has produced progeny selling to $20,000. Her grandson is Sprys All Gold D052, sold to Ron Falls of Malton Stud in 2011 for $25,000. Sprys All Class N6, a son of Zambesi 2nd, sold in 1995 for $17,500 to Coolong Pastoral, Adelong and went on to be a very successful sire.

With his combination of genetics and phenotype, Sprys Emerald is making a very positive contribution to our herd. (Click here for pedigree details) 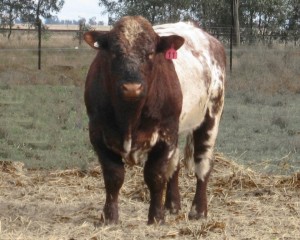 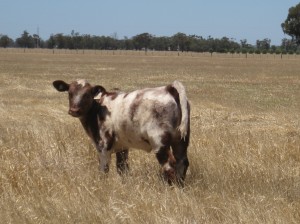