In 2010 Glen and Lindley Trengove dispersed their highly successful Broughton Park herd and sold it to the Manchees of Yamburgan.

We were delighted to have the offer to purchase Kung Fu Panda who was purchased by the Trengoves at the Futurity Bull Sale of 2009 for the sale topping price of $18000. Described by the Catts as a 'Sire of the Future…moderate framed, very thick made, easy doing and high performance', Panda was a magnificent deep red and had an excellent range of EBVs. He was a real curve bender with very moderate birth weight figures and could be used over cows and heifers.

His progeny show excellent growth rates, style and substance. Many inherited his deep red colour and easy going disposition. Panda also had a very placid temperament and was believed to be a homozygous polled sire. The Trengoves thought so highly of him that he was substituted for their A.I. programme.

Panda sired our top steer in the 2015 Beef Spectacular Feedback Trial which confirmed our faith in him. 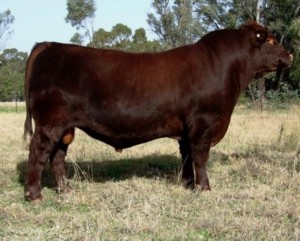 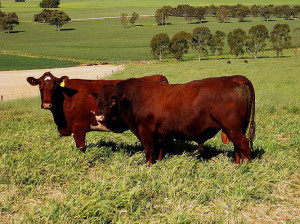