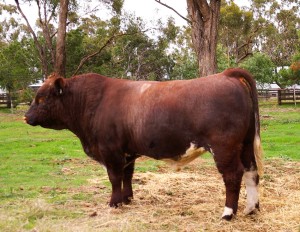 Belmore Shogun on arrival at ‘Heatherleigh’.

We purchased Belmore Shogun J40 at the second annual Belmore Sale as one of the feature Belmore lots. First son of the Northern Legend (imp) son, Belmore Patriarch, he was part of the Belmore show team and a class winner at the 2014 Royal Adelaide Show.

Shogun has an excellent temperament and is regarded by Andy Withers as a 'super son of Patriarch F102'. Patriot himself is a most impressive son of the Canadian bull, Northern Legend, with U.K. semen rights held by G. Turton, Upsall Stud, North Yorkshire.

Shogun was regarded as incredibly easy doing by the Belmore Stud, and at 928 kgs at 22 months, presented as the heaviest of the Belmore bulls. He also scanned the highest EMA of the Belmore bulls at 128 square cms and his testicles measured 44 cms.  A stand out calf from birth, he is regarded as having 'superb temperament, length and width'. His EBVs show explosive 200 and 400 day growth rates, moderate birth weight, short gestation length, excellent retail beef yield, milk and EMA. Andy regarded him as having a 'tremendous  carcass' with marbling potential. Shogun's $ indices are all in the top 15% of the breed.

Shogun has two close lines to super sire, The Grove Kookaburra. Kookaburra 's progeny sold to $27000 at the 2014 Yamburgan Sale and the Diamond Shorthorn high selling bull at the Canadian Agribition sold for $12000. Shogun's dam has always been regarded as the best Kookaburra cow of her drop. His sire, Patriarch, is also out of a Kookaburra dam.

Shogun should improve the growth of our calves while maintaining moderate birth weights and excellent carcass characteristics.